Thomas worked as a blacksmith in Aldinga with his father, Thomas Pengilly senior, until about 1875, when the older Thomas Pengilly retired. Thomas Pengilly junior, aged 31 years, married Hilda Fidge (1853-1901), aged 22 years, at the Baptist Chapel, Morphett Vale on 31 March 1875. She was the oldest daughter of Lewis Fidge. They had three children:

The land at 24 Old Coach Road in Aldinga was first leased by Thomas Pengilly junior from his father-in-law, Lewis Fidge, in September 1876. Thomas junior appears in a photo titled “Aldinga Pioneers” dated to the first half of 1886. He was an eyewitness to the wreck of the Star of Greece in 1888 and, when a rocket crew was formed after the wreck, he was one of the first to join. A setback occurred in June 1895, when a fire badly damaged the blacksmith premises, resulting in a loss of all his tools and stock. Thomas Pengilly the younger continued in this venture until 1898, when he retired to pursue agriculture, having received a legacy of 240 acres in the district. Thomas and Hilda lived at Hilda’s Dale Farm.

Hilda Pengilly, aged 48 years, died on 7 August 1901 and Thomas Pengilly junior, aged 81 years, died on 5 April 1925. They both died at Aldinga and are buried in the Aldinga Uniting Church Cemetery. 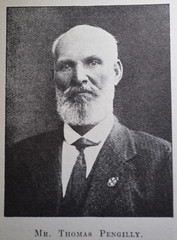 Do you remember Pengilly, Thomas (junior) ? Then Join up and add your memory here.

This page was last modified on 23 May 2021, at 18:09.Text on this site is available under the Creative Commons Attributions/Share Alike licence; additional terms may also apply. See our Terms of Use.
About Now and Then | Places | People | Events | Organisations | Things | Contact us