Built in 1862 by the SA Police Force for Charlotte, widow of Inspector Richard Pettinger who was killed while on duty at a fete at Government House in Adelaide in February 1862. The murderer was a recently dismissed constable who blamed Pettinger for his dismissal for drunkenness. He was speedily tried and hanged in March 1862.

Charlotte Pettinger (nee Aldam) had family in Willunga, hence the decision to provide a house in the town. It is of brick construction with a dressed sandstone front wall and eight pane double hung casement windows. The house was designed as a shop and residence.

However Charlotte Pettinger died only two years later, in 1864, aged only 38, leaving three children aged 7, 5 and 3 years who were cared for by the Aldam family.

Isaac Needham owned the house (and the next door property) by 1869. He ran a licensed wine store in the shop area.

Needham's daughter Mary lived here with her husband Edward Hunt after retirement from their Delabole sheep farm around 1911.

It was home to Alfred and Elizabeth Redstone in the 1940s and 1950s, then followed a succession of owners including Reuben Polden, Homer Pyknis, the Bleechmores from 1979-2001 and the Lienert family until c. 2012.

Substantial rear extensions were made in 2013 by new owners Ursula and Geoff Pridham. 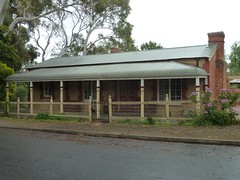 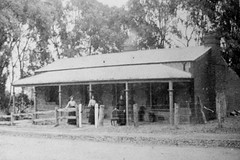 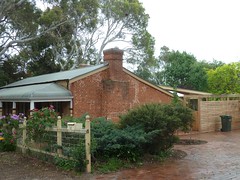 Do you remember Pettinger Residence (The Gums) 10 Bishop Street ? Then Join up and add your memory here.

This page was last modified on 21 May 2021, at 08:20.Text on this site is available under the Creative Commons Attributions/Share Alike licence; additional terms may also apply. See our Terms of Use.
About Now and Then | Places | People | Events | Organisations | Things | Contact us