Willunga's first telegraph station and second post office was erected in stages between 1857 and 1867. It is one of the oldest Post Office and Telegraph Stations in the state and operated on this site from 18857/8 until the present Post Office was opened in 1916. It is part of the complex of Government buildings erected on the original Government Reserve, which include the Court House and Police Station opposite.

Before the construction of this building, the first Post Office (1839) was housed in a hut on the Government Reserve, near the present Court House. The fortnightly mail between Adelaide and Encounter Bay was carried by the Mounted Police. William Deacon started a twice weekly passenger and mail service between Adelaide and Willunga in 1840. In 1851 the Post Office was re-located to 1 St Peters Terrace, with Henry Malpas as Post Master.

This Post Office and new Telegraph Station (which was a stage in the first Overland Telegraph between Adelaide and Melbourne) was opened in 1858 in the single storey section of the present building at 62 High Street. The two storey section was added in 1865, built by George Sara & Sons.

Henry Pounsett was the first Post Master from 1858 until his death in 1891, aged 82 years. He was a notable musician, being the first organist at St Paul’s Church in Pulteney Street, Adelaide and St Stephen’s Church, Willunga. He and his family featured as vocalists at local events, including the opening of the Oddfellow’s Hall.

Following his retirement, Miss Eshter Sadler arrived with her sister, Sarah, from Curramulka post office to serve as Post Mistress until 1901. In 1895 a wedding was held in the building – that of Sarah to Felix DeCaux of Meadows.

Mrs Annie Shoobridge transferred from Port Eliot and was postmistress from 1901 until she resigned in 1905.

Miss Theresa Glenie came to Willunga, after 16 years at Mitcham post office, in 1905 and was postmistress until 1917. Her salary was £104, less £14 for rent of quarters. She had worked as Stationmaster and later as Post Mistress since her father had died in 1875, leaving his wife and 11 children. Mrs Glenie died while staying with her daughter at the post office in 1905.

During this time, Alfred DeCaux delivered mail to Dinabledinga two days a week, using a two wheel horse drawn cart. When he left the area, Mrs Mortimer Jackson, driving a horse and trap, continued the service for 4 years.

For many years the mail between Adelaide and Willunga was carried by the coach, then in 1915 by the train, the passenger bus and later by PMG vans.

When, in 1916, the Post Office moved to its present location at 4 High Street, this building ceased its function as a Post and Telegraph Station. It was sold by the Government in 1935 and restored in 1986. 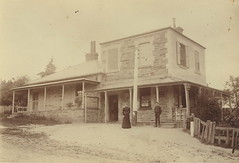 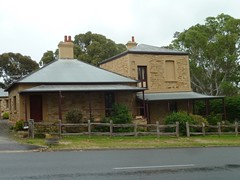 Do you remember Post Office and Telegraph Station 62 High Street ? Then Join up and add your memory here.

This page was last modified on 3 December 2020, at 14:37.Text on this site is available under the Creative Commons Attributions/Share Alike licence; additional terms may also apply. See our Terms of Use.
About Now and Then | Places | People | Events | Organisations | Things | Contact us