James William Quinn held the license for the Willunga Hotel at 5 High Street from 14 Dec 1897 until his death in 1904 (nearly 7 years). The Willunga Hotel had been built for James Castle and opened in Oct 1868.

James William Quinn, aged 43 years, died on 12 June 1904 at Willunga and he was buried in St. Joseph’s Catholic Cemetery in Willunga. 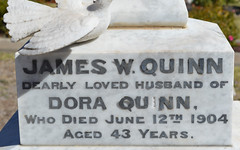 Do you remember Quinn, James William ? Then Join up and add your memory here.

This page was last modified on 17 April 2021, at 12:08.Text on this site is available under the Creative Commons Attributions/Share Alike licence; additional terms may also apply. See our Terms of Use.
About Now and Then | Places | People | Events | Organisations | Things | Contact us