Cliff was a quarryman/labourer who worked for a wage of 5s per day at the Bangor slate quarry from 1919 until it went into liquidation on 1929. He had a number of jobs during the Depression, returning to Bangor Quarry in 1934 and earning 15s per day. He worked a 48 hour week, walking 2 ½ miles (4 km) up into the hills to work each day, leaving home at 6.30am. In the late 1930s he made roofing slates for the Outpatients Building at the Royal Adelaide hospital. Other buildings that he made roofing slate for included Bonython Hall (at Adelaide University), St Francis Xavier Cathedral, Crystal Brook RSL, Wayville RSL and for repairs to St Peter Cathedral. He worked with Bill Meverlay and Jack Arthur.

Cliff and his family lived at 17 St Marys Street in Willunga. Murray Clifford Reed changed his name to Murray Clifton Reed on 1 July 1944. 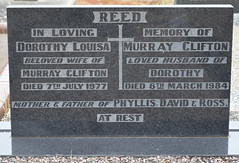 Do you remember Reed, Murray Clifton ("Cliff") ? Then Join up and add your memory here.

This page was last modified on 28 November 2021, at 12:18.Text on this site is available under the Creative Commons Attributions/Share Alike licence; additional terms may also apply. See our Terms of Use.
About Now and Then | Places | People | Events | Organisations | Things | Contact us