William Reed junior, aged 34, his wife Eliza (31) and their four oldest children, Agnes (9), twins Francis & John Thomas (5) and Jane (3) arrived at Port Adelaide on 19 January 1857 aboard Marion from Plymouth. Also on board Marion were William’s parents, William Reed senior and his wife Jane, and his brother, James Reed and his family.

William Reed was a quarryman/labourer who worked in the Delabole quarry. From before May 1858, the Reed family probably lived in a small pug cottage in Delabole village in the Willunga district where their last four children were born. William Reed only worked as a quarrymen for a few years as, by the late 1860s, William Reed had become a farmer, at least part-time. He is described as a farmer in the SA Directories of the time. He paid rates on 30 acres of section 749 and 84 acres of section 758 from 1869 and then on 33 acres (sections 748 and 749) from 1873. In the mid 1870s, he also paid rates on a house in Gloucester (McLaren Vale) and, between 1879 and 1881, on a house in the township of Willunga. This may be the cottage at 17 St Mary’s Street. He was described as a farmer of Willunga when he purchased the two allotments (146 and 149) fronting onto St Marys Street, Willunga on 13 March 1890, presumably when he retired.

William Reed, aged 78 years, died at Willunga on 7 October 1901 and Eliza Reed (née Prout) died on 8 April 1906 in Willunga. They are both buried in the Wesleyan Methodist (Uniting) Church Cemetery in Willunga. 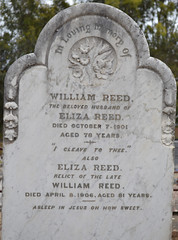 Do you remember Reed, William (junior) ? Then Join up and add your memory here.

This page was last modified on 17 November 2021, at 14:05.Text on this site is available under the Creative Commons Attributions/Share Alike licence; additional terms may also apply. See our Terms of Use.
About Now and Then | Places | People | Events | Organisations | Things | Contact us