John Richards (senior) was born in Cornwall, England in about 1826.

John Richards senior (28), his wife Mary (31) and their two sons, William (5) and infant John junior arrived in Adelaide on October 24, 1854 aboard the ship Emigrant. He was described as a carpenter and, later, as a builder. After the family settled in Willunga in about 1856, John and his growing family lived in a handsome, two-storey house and workshop located at 15 Aldinga Road, in section 257. John had significant land interests throughout South Australia. In the Willunga District, he held sections 247, 257 and 268.

John (senior) and later, from about 1875, his son, William, became respected builders in Willunga, erecting many of the public buildings, including the Church of England Parish Hall, the Methodist Hall and the Willunga Public School. John was involved with the Loyal Willunga Lodge, Independent Order of Fellows (IOOF) Manchester Unity, becoming a trustee for the Oddfellows Hall from 1873 until his death.

His son, John Richards (junior), died in 1886 and left the Richards general store at 22 High Street to his mother, Mary. She owned and operated the store for three years until her death aged 66 years, on 12 August 1889. 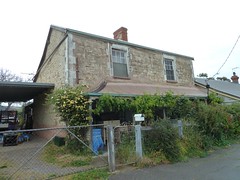 Do you remember Richards, John (senior) ? Then Join up and add your memory here.

This page was last modified on 3 October 2021, at 16:20.Text on this site is available under the Creative Commons Attributions/Share Alike licence; additional terms may also apply. See our Terms of Use.
About Now and Then | Places | People | Events | Organisations | Things | Contact us