Elizabeth and Edmund Rowe married and lived in Cornwall before emigrating to SA on the ship William Money, arriving in 1849, together with other members of the Rowe family.

Elizabeth and Edmund’s three children were all born in England:

Several years later, the Rowe family settled on the farm Waybrook, close to Willunga in an area then known as McLaren Flat. The property on Section 705 had been purchased in 1844/5 by a relative Thomas Stacey who named it Waybrook Farm. It was sold to George Beaumont, who leased it to Edmund Rowe until he bought it in 1860. Rowe’s holdings then comprised Sections 704 and 705 on the corner of Edwards Road and old Strout Road (now closed).

Edmund Rowe was a founding member of the Primitive Methodist Chapel in the McLaren Flat/Willunga area. He was one of seven Trustees who bought from Richard Strout the land on which the first Chapel was opened on Strout Road in March 1861. As a Trustee, he would have been closely involved with the tendering process for the construction of the Church and a participant in the celebrations that took place when it opened.

At this time, Edmund Rowe would have been involved in the decision to build the district’s second Primitive Methodist Chapel in a prominent location at 27 High Street in Willunga. In September 1867, he was given the honour of laying the foundation stone for this building, on which occasion he was described “as an old and well-tried friend of the society”. He was at this time 62 years of age.

From at least 1861 Edmund Rowe had owned several other properties in addition to Waybrook Farm on Gaffney Rd. These included Willunga Township allotments 8, 9 and 10 in St James Street and Lot 50 in High Street, which were originally purchased in the 1850s by Charles Rowe (possibly his father or brother).

In 1875, possibly in preparation for retirement, Henry offered the James Street properties for sale:

Edmund Rowe moved to North Adelaide around 1877, although he still retained an interest in Waybrook Farm which, since the death of his son in 1873, had been managed by his daughter-in-law Jane Rowe, nee Jackson.

Edmund Rowe, late of Waybrook Farm, Willunga died on 22nd February 1882 at his residence in Barton Terrace North Adelaide, in his 77th year. His friends were informed that his Remains would arrive for Interment at the McLaren Flat Cemetery at 11 o'clock on Friday, February 24, 1882. 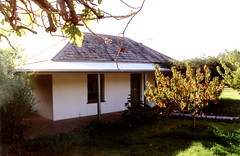 Do you remember Rowe, Edmund ? Then Join up and add your memory here.

This page was last modified on 5 September 2020, at 15:55.Text on this site is available under the Creative Commons Attributions/Share Alike licence; additional terms may also apply. See our Terms of Use.
About Now and Then | Places | People | Events | Organisations | Things | Contact us