George Sara, later known as the ‘grand old man’ of Willunga, and a ‘fine old man’, migrated from Cornwall in 1848, aged 35. He brought his stonemason skills with him when he migrated with his wife Esther and five children. Two more sons were born in Willunga. After Esther's death in 1881, he married Peggy Polkinghorne in 1884, when he was 71.

George was an enterprising businessman. Within a decade of his arrival he had established a building firm, George Sara & Sons, based at Lot 59 High Street , which was responsible for many buildings in Willunga and further afield. His first task on arrival was to help erect the square tower on the Catholic Church - the base remains today. One of his other early jobs was the big old Wesleyan Church. He said “It was a fine old building, 60 ft by 40 ft., and some glorious times we had there. The singing - real old-time Cornish singing - was something to be remembered. The roof, however, was out of proportion; it was too heavy, and the gables gave away. No, it was not caused by the singing: and the Church later had to be dismantled”. It is recorded that as an eighty year old George went up on the roof to help with the demolition!

George Sara’s firm built some of the finest homes in the Willunga area, including the two-storied home of Sampson Dawe, in St Andrews Tce, as well as the the first St Stephen's Anglican Church on Aldinga Road (no longer standing), Butterworth’s Flour Mill (ruins on the old Aldinga Road), and St Ann’s Church of England Aldinga. One of the trademarks of a Sara building is the use of reinforcing rods (tie rods) braced by a large “S” at each end.

In the 1860s, the firm started carrying out government contracts, including the huge railway viaduct over Currency Creek and the Police Station and Courthouse at Clarendon. Then his sons, in partnership with John Dunstan, built the Burra School, followed by the Gladstone Goal and later the Roseworthy Agricultural College building, opened in 1885. All the railway stations from Riverton to Burra were built by Sara & Dunstan. Back at Willunga, George built the new St Stephen’s Anglican Church in 1884.

George was a Justice of the Peace and a staunch member of the Methodist Church. With the assistance of Mr. Bennett James he formed the Sunday School at Willunga. When interviewed in 1912, not long before his death, he said he had filled every position in the Church open to a layman. He was still a fairly regular Church-goer in 1912, despite his advanced age. His sight was good and he was able to read the Advertiser. As well he kept up an extensive correspondence with friends and relatives.

George was a local Councillor for a number of years and chairman of the Willunga District Council for two terms, not seeking re-election in 1875. He is also remembered for carving the epitaphs and headstones (many made of slate) on the graves in various local cemeteries from 1858 onwards.

He spent his later years in the home of Mr & Mrs J R P Male in St Georges St, Willunga, where as he said “I make it a practise to take some manual exercise. There under the old tree near the gate is the woodheap, and one of my favourite forms of physical exertion is to saw up a few lengths of wood with a cross-cut saw. If the weather is fine’ he added, ‘I go to Church once every Sunday, and the distance is about half a mile”.

His death was unexpected. He was in good health and spirits on Friday morning, and was eating a hearty breakfast as usual when, it is said, he choked over a plum. He died next day Saturday January 24th 1914, aged 100 years and eight weeks.

George summed up his life as follows: “South Australia has made marvellous progress since my arrival here. There have been good times and bad ones, and I have had my ups and downs: but I have been blessed with a buoyant optimistic spirit, and my life in this beautiful garden of God’s earth has been a happy one”. 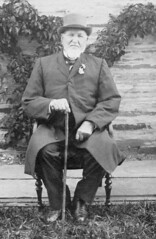 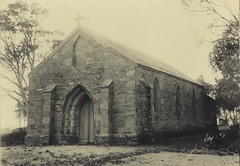 Do you remember Sara, George ? Then Join up and add your memory here.

This page was last modified on 7 December 2021, at 14:29.Text on this site is available under the Creative Commons Attributions/Share Alike licence; additional terms may also apply. See our Terms of Use.
About Now and Then | Places | People | Events | Organisations | Things | Contact us