George Thomas Schmidt/Smith was born at Yanyarrie, near Carrieton SA on May 29th 1889. His father was Edward Ernest Schmidt and his mother was Julia Schmidt (née Bagg). He became a blacksmith upon leaving school and then joined the South Australian Police as a mounted constable on July 7th 1913. He performed his duties at Adelaide and then did duty at Noarlunga, Willunga, Eudunda, Kapunda, Snowdon and Caltowie before being stationed at Gumeracha. Mounted Constable Schmidt changed his name to Smith sometime during his service, probably because of the prejudice widely felt against Germans during WW1. He served at Willunga from February 7th 1914 to June 5th 1914, during the time that John Clark was also stationed at Willunga.

On December 31st 1928, Mounted Constable George Smith descended into a well after an explosion, in an attempt to to save two men, and lost his life by inhaling the poisonous fumes. After his funeral, 200 police officers lined the streets of Adelaide and then marched to the West Terrace cemetery, where he was buried.

A tribute to MC Smith outlined the work required of him, which is an indication of what other Mounted Constables would have had to do at the time. At Gumeracha, MC Smith was, in addition to the work as a police officer, clerk and bailiff of Gumeracha Local Court, District Registrar of Births, Marriages and Deaths, Registrar of War, Old Age and Invalid Pensions, inspector under the Entertainments Act and commissioner for taking affidavits.

The death of Constable Smith incited considerable anger in the police force, as his widow was entitled to receive only the contributions made by the constable to the police pension fund, with no interest or contribution by the government. There was also indignation in the community as, according to the Register News-Pictorial, “the officer was held in the highest esteem by the townspeople.” Bowing to significant public pressure, the Police Pensions Act was created and received royal assent on November 27th 1929. The Act specifically mentions Mrs Smith and her children as well as the widow of Foot Constable Cyril Clayton who was also killed on duty in 1928, ensuring the provision of annual pensions to them.

A public subscription resulted in the erection of a memorial arch, now located at Federation Park in Gumeracha. In addition, in 1990 the South Australian Police Historical Society placed a plaque in the front of the Police Station to commemorate those who died in the tragedy. 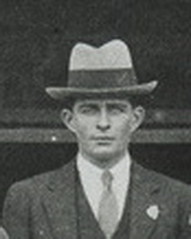 Do you remember Schmidt/Smith, George Thomas (Constable) ? Then Join up and add your memory here.

This page was last modified on 22 June 2020, at 15:56.Text on this site is available under the Creative Commons Attributions/Share Alike licence; additional terms may also apply. See our Terms of Use.
About Now and Then | Places | People | Events | Organisations | Things | Contact us