Charles Self (Jnr) arrived in South Australia in 1838 with his parents, as a 6-year-old.

He married Jane Elizabeth Sweeting on 15 September 1858 at the Church of St Philip & St James at Noarlunga. The groom was a 23-year-old stonemason, born in Aldeburgh, Suffolk, son of Charles and Mary Self. The bride Jane was the 21-year-old daughter of Henry Sweeting.

Charles and Jane Self had 8 children, three of whom died during childhood:

• Charlotte, born on 26 June 1859 at Aldinga. She never married and died at Noarlunga on 30 September 1894, aged 35 years, buried at Willunga Anglican Cemetery.

• Alfred Arthur, born on 30 December 1866 at Aldinga. He died at Aldinga on 25 January 1869, aged 2 years and was buried at Aldinga Anglican cemetery.

• Henry Albert, born on 18 June 1869 at Aldinga. He never married and died at Willunga on 7 January 1939, aged 70 years, buried at Willunga Anglican cemetery.

• Alice Emma, born on 16 February 1874 at Port Aldinga [Pt Willunga]. She never married and died on 31 January 1953 at Northfield, usual place of residence was recorded as Willunga. Age 73 years.

In 1863 a Charles Self was awarded the tender to make a tank at the Aldinga schoolhouse. Then, in January 1869, Charles Self of Aldinga gave evidence at Willunga during the prosecution of a person accused of stealing a bottle of whiskey from the Aldinga Hotel.

From 1870 to 1876 Charles Self and family lived in, and paid rates on, a house owned by George Mills in Section 391 in Port Willunga township.

Sometime after, they moved to Willunga township, living in a single-fronted, two-storey cottage at 33 Church Rd (later Aldinga Rd), since demolished. They then moved to 5 St Peters Tce in Willunga which continued to be rented by family members for probably 50 years until the 1950s and became known as Self’s cottage.

In October 1902 it was reported that Mr Charles Self, an older resident of Willunga, sustained a compound fracture of his leg, the injury being caused by a fall down the stairs of his residence. In 1906 Charles Self signed the Roll Call of old colonists who were pioneer settlers during the years from 1836 to 1840. 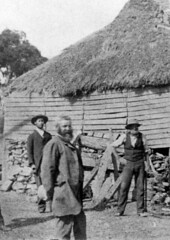 Memories of Self, Charles (Jnr)

Do you remember Self, Charles (Jnr) ? Then Join up and add your memory here.

This page was last modified on 30 May 2020, at 15:15.Text on this site is available under the Creative Commons Attributions/Share Alike licence; additional terms may also apply. See our Terms of Use.
About Now and Then | Places | People | Events | Organisations | Things | Contact us