Charles Frederick (Fred) Self was born on 11 November 1864 at Noarlunga. His parents were Charles Self (Jnr) and Jane Elizabeth Self (nee Sweeting).

Fred lived most of his adult life at 5 St Peters Terrace in Willunga with his two single brothers Henry and Arthur and his single sister Alice .

Fred Self was a much-loved and well-known identity in Willunga. He was verger, grave-digger and bell-ringer for St Stephen's Church of England and also the 'boots' at the Alma Hotel. For many years, his photograph was prominently displayed in the Hotel.

In 1935 it was reported that Fred had tolled the Church bell for 55 years, had never been on a train and had not been to Adelaide since 1887. Had there not been a Russian scare he might never have visited the city. As it was, he remained in the Army camp in 1887 for only a short while before returning home.

The only time Fred missed tolling the bell was when peace was declared at the end of the First World War when somebody reached the church before him, much to his annoyance. He also missed his duties once when he had the measles. It was reported that as grave digger he had seen 374 persons go to their rest in the cemetery.

Fred’s brother Jack (Henry Albert) was known for his eating abilities, once losing a bet to eat six dozen fried eggs at the local blacksmith shop, after forgetting the bet and eating his usual hearty breakfast beforehand. On another occasion at Sellicks Hill Jack won a bet that he could eat 9 ½ feet of sausages.

Another brother Art (Arthur Edward) was a long standing player and consistent goal-scorer with the Willunga Football Club. He was identified as builder, along with Mr H M Richards, of St Stephens Parish Hall in a 1924 photo.

Fred Self never married. He died at home on 3 June 1939, aged 74 years and is buried at St Stephen's Anglican cemetery in Willunga. 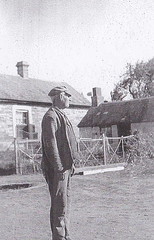 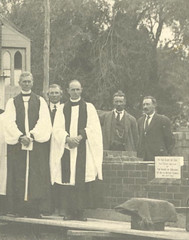 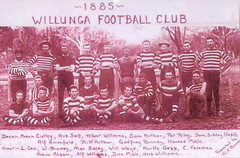 Memories of Self, Charles Frederick (Fred)

Do you remember Self, Charles Frederick (Fred) ? Then Join up and add your memory here.

This page was last modified on 13 June 2020, at 13:32.Text on this site is available under the Creative Commons Attributions/Share Alike licence; additional terms may also apply. See our Terms of Use.
About Now and Then | Places | People | Events | Organisations | Things | Contact us