The spotlight fell on the quiet life of Thomas Skeyhill in 1899, when he was interviewed by The Advertiser and proclaimed as having lived during three different centuries. Tom declared that he did not know the exact date of his birthday, but thought it was 'sometime in December'. It was calculated that he was 107, having been born 5 years before his 'foster brother' * , Sir Dominic Daly, Governor of South Australia, who did know when he was born! When Sir Dominic Daly visited Willunga to open the Oddfellows Hall in 1863 he and Tom 'had a long talk together in Irish about old times and old scenes'.

In about 1856, at the age of 65, Thomas had arrived in Port Adelaide from Loughrea, a village in Connaught, Ireland. He settled on Section 73 Hundred of Kuitpo at Dingabledinga on Brookman Road, near Willunga.

Thomas married Margaret (possibly Ryan) in 1871 and they had a family of four sons and two daughters. Margaret was 39 years younger than Tom and regularly walked 13km from their home down the hill to Willunga and back into her 60s. Shortly after their marriage, a fire destroyed their house and all their possessions, including £100, mostly in bank notes, that he had hidden in their thatched cottage.

The reporter described Tom in old age as 'kindly disposed, and though he has very little to say, he always asks visitors to have a cup of tea. He spends his time chiefly in minding his cows, attending to the pigs and poultry, and gathering up the eggs regularly [He] is in his element when using the axe... he never indulged in either intoxicants or nicotine.'

Margaret died at 67 in 1899. She 'had been ailing, and [had] had the additional misfortune to lose her only daughter, [Maggie] and later on a son [John]. She grieved very much over their death, and no doubt this hastened her end.'

Tom lived at Dingabledinga with his son and daughter-in-law Daniel and Nellie (Hailstone) until his death. Daniel supplemented the farm income, as many men did, by undertaking Council road work contracts and his farm grew considerably in 1907, when Sections 258 and 264 were allotted to him. In partnership with Frank Hailstone, he established a business carting logs by bullock dray, often to the railway for use as shoring timbers in the Broken Hill mines. He was obviously riled one day in 1907 by one of his patrons, Felix Decaux, who took him to Willunga court for abusive language. Dan was fined 5/- with 15/- costs. On the other hand, Daniel was a generous man: he donated funds and effort to various causes, most importantly to the additions to the Willunga Catholic presbytery in the early 1920s.

Tom died after a severe attack of bronchitis in 1901. '...A large number of people attended the funeral, and the Rev. T. J. Cosgrave officiated at the grave." He was 108.

Thomas, Margaret and their daughter Maggie are buried in unmarked graves at St Josephs and the gravesites are recorded in the archives there. They lie close to their son and daughter-in-law, Daniel and Nellie. It is touching to see that, following Daniel's death in 1928, Nellie continued to insert memorials for him in the newspapers for at least 25 years. One such passage reads: 'With tender love and deep regret. We who loved you will never forget.'

( * He could have actually been Sir Dominic Daly's coach driver, as one Willunga oral history account states.) 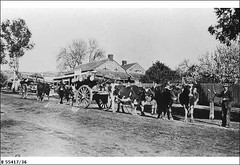 Do you remember Skeyhill family ? Then Join up and add your memory here.

This page was last modified on 30 April 2020, at 09:13.Text on this site is available under the Creative Commons Attributions/Share Alike licence; additional terms may also apply. See our Terms of Use.
About Now and Then | Places | People | Events | Organisations | Things | Contact us