John Snoswell was a publican and then a farmer. He was resident in Willunga from 1845 until at least 1870. John was the licensee of the Bush Inn for 2 years from March 1845 to March 1847 – this was the second (two-storey) Bush Inn located at the back of what was subsequently 51 High Street. In Jan 1847 John Snoswell purchased section 2148 (80 acres) for £81 15s at the Government Land Sale. John and his family appear to have remained resident in Willunga until 1869 when, aged 50 years, he relocated to Port Adelaide. In December 1869 he leased (Lease 33677) part of Lot 6 (at the corner of St. Vincent Street and Torrens Place) and he became the landlord of the Duke of Wellington Hotel (1869-1873). He advertised his 80-acre section of land at Willunga, including a vineyard, for sale in March 1871.

John Snoswell, aged 55 years, died on 4 Sept 1873 at the Duke of Wellington Hotel, Port Adelaide. His second wife Eliza, aged 40 yesrs, died at Port Adelaide in 1874 and she is buried in the Alberton Cemetery. 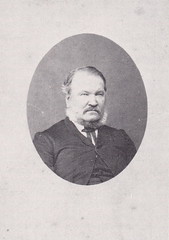 Do you remember Snoswell, John ? Then Join up and add your memory here.

This page was last modified on 3 June 2020, at 17:39.Text on this site is available under the Creative Commons Attributions/Share Alike licence; additional terms may also apply. See our Terms of Use.
About Now and Then | Places | People | Events | Organisations | Things | Contact us