The Catholic Church of St Joseph, Willunga, was opened on 5 May 1850 by Bishop Murphy of Adelaide.

Before the church was built, visiting priests had celebrated Mass in the houses of local church members. Bishop Murphy’s first reference to Willunga is made in his journal in March 1845, when he visited the area for four days and celebrated Mass at Martins. He proposed the building of a church but the small population of Catholics could not support the cost.

In 1847, on his return from an official visit to Rome, he held a meeting at Martin’s home, where it was resolved to erect a church, using subscriptions and Government aid. By February 1848, William Weir, architect, had drawn plans for a church and cottage-presbytery with an estimated cost of 350 pounds. Mr Farrel was secured as the builder. The foundation stone of the church was laid on 16 March 1848, and the foundations of a cottage-presbytery were dug.

By April 1850, Father Thomas E Caldwell had become Willunga’s first resident parish priest. He moved in to his cottage-presbytery on 10 April and began to use the church from the start of May. Church benches arrived several weeks later and two baptisms took place in June, of Finke and Martin children. These are recorded in Fr Caldwell’s diary; Fr Peter Hughes, who became resident priest in 1853, recorded the first entries in the parish’s marriage and baptismal registers.

In October 1850, Bishop Murphy applied to the Colonial Government for glebe land at Willunga and received a grant of 20 acres, described as Section 307 on Gaffney Road, near Willunga. This was granted for use as a cemetery, site for a dwelling, garden or other needs. It was never used as a cemetery and became the home of the Gaffney family.

The return of Number and description of Places of Worship in Connection with the Roman Catholic Church in Willunga for 5 January 1851, noted that there was one place of worship, which could accommodate 300, with an average attendance of 113. There had been 18 baptisms and 2 deaths recorded by this time. 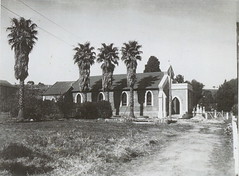 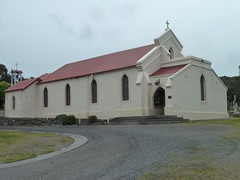 Do you remember St Joseph's Catholic Church ? Then Join up and add your memory here.

This page was last modified on 12 April 2019, at 20:16.Text on this site is available under the Creative Commons Attributions/Share Alike licence; additional terms may also apply. See our Terms of Use.
About Now and Then | Places | People | Events | Organisations | Things | Contact us