Residents of St Matthews Street volunteer to host the street party on a year-by-year basis. There is no formal committee, and no “ownership”, although enthusiastic residents warmly encourage participation. All residents and former residents are welcomed and there are no distinctions between property owners and renters.

The format of the street party is fairly standard each year. There is a barbeque (borrowed from neighbours if necessary), and each family brings their own meat, a salad or dessert to share, and beverages of choice. Some people bring portable chairs. The host household supplies the cutlery, plates and condiments. The party is held on a Sunday afternoon to accommodate the majority of needs.

The Street Party is a reflection of the evolving nature of St Matthews Street. When the Party was first held, many of the residents were young families. As time went on and children grew up, there have been mainly adults attending the party. In recent years, the number of young children playing at the Party has grown as current residents welcome young families who buy and build – a very pleasing development.

The St Matthews Street Party is a neighbourhood event. Each year residents strengthen their ties with others they may see only once a year, learn more about the neighbourhood and area, and experience the benefits of community. 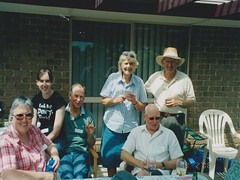 Do you remember St Matthews Street Party ? Then Join up and add your memory here.

This page was last modified on 6 June 2015, at 16:50.Text on this site is available under the Creative Commons Attributions/Share Alike licence; additional terms may also apply. See our Terms of Use.
About Now and Then | Places | People | Events | Organisations | Things | Contact us