This was the second Anglican Church in the township, built in 1884 to replace the first church on Aldinga Road.

The idea of building the new church was renewed at an 1880 meeting of Church of England ladies who initially planned to raise funds for the repair of the first Church. The ladies worked energetically and by September 1883 they had raised £550.

Land was purchased from Thomas Atkinson. Tenders were let and local builders George Sara & Sons built the second Church of St Stephen, in Gothic style with brick dressing, under the architectural supervision of Mr Poulton of the Church of England.

The church tower houses a fine-toned bell weighing 225 pounds, presented by Rev Burnett, and supposedly cast early in the reign of Elizabeth I. In 1887 it was re-housed here from the first Church after being re-cast, to fix cracking, by Union Engineering Company in Adelaide.

The original spire with spirettes on each corner was removed in the 1920s for safety reasons. In 1924 a Parish Hall was built behind the Church. This was demolished in 1983.

Later additions include wooden panelling in the 1940s and in the 1950s a stained glass window was dedicated to the Hill family. In 1979 the altar was brought forward and the central window uncovered.

In 2013 St Stephen's is part of the Anglican Pastoral District of Southern Vales which includes St Philip and St James (1852) at Old Noarlunga, St Ann's (1867) at Aldinga and St Margaret of Scotland (1911) at McLaren Vale.

St Stephen's offers a Holy Eucharist or Vigil Mass at 5.30 pm each Saturday. Baptisms, weddings and funerals are arranged through the Pastoral District Priest. 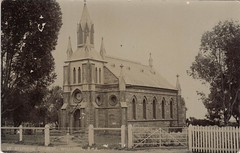 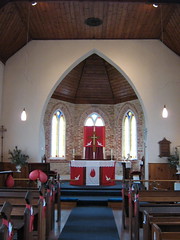 Do you remember St Stephen's Church ? Then Join up and add your memory here.

This page was last modified on 12 April 2019, at 20:04.Text on this site is available under the Creative Commons Attributions/Share Alike licence; additional terms may also apply. See our Terms of Use.
About Now and Then | Places | People | Events | Organisations | Things | Contact us