Thomas, then aged 22 years, married Elizabeth Edmunds (or Edmonds) on 27 November 1828 at St Buryan, a few miles to the west of Paul, in Cornwall. At the time, Thomas was living in St Buryan. Thomas and Elizabeth had at least six children, some of whom died in infancy. Four of these were:

Thomas, then aged 41 years, Elizabeth and their three oldest surviving children, Charles, Mary Ann and possibly Ann, arrived in Port Adelaide on 3 April 1847 on board the emigrant barque Phoebe from London and Plymouth. Thomas was listed in the South Australian Register newspaper on 7 March 1850 as a labourer of Willunga when he was a signatory on the declaration of support for Mr John Stephens. The South Australian Register on 15 June 1853 listed Thomas Trenowth as a signatory on a Memorial sent to the SA Governor requesting the deepening of the Outer Harbour at Port Adelaide.

Thomas Trenowth is only known to have carved a single headstone, that of John Mugfer who died in 1854. That headstone survives in the Bible Christian cemetery in Torrens Vale. The stone has T. Trenowth, Willunga carved on the bottom right-hand side.

In 1859, Thomas became a land-owner in the Willunga district when he purchased two Lots: Lot 272 in Section 700 of Survey C from James Bell Williams and Lot 264 of Section 700 Survey C from Bennett John James. A South Australian Certificate of Title (Register Book Vol VIII folio 75) was issued to him. 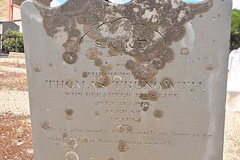 Do you remember Trenowth, Thomas ? Then Join up and add your memory here.

This page was last modified on 7 October 2021, at 17:21.Text on this site is available under the Creative Commons Attributions/Share Alike licence; additional terms may also apply. See our Terms of Use.
About Now and Then | Places | People | Events | Organisations | Things | Contact us