There was strong development of Basketball in SA during the 1930s - a team existed in McLaren Vale in 1931 and in 1933 a Willunga team is mentioned;

GEELONG GIRLS HERE FOR BASKETBALL About 23 girls from the East Geelong Congregational Band of Hope arrived in Adelaide today to play basketball against South Australian teams. Tomorrow afternoon matches will be played at Port Adelaide, and on Tuesday a visit will be made to play against Willunga. (News Friday 20 October 1933 p 5)

The first record of the Willunga Basketball Club is in 1934:

ALDINGA The Willunga Basketball Club was defeated by the local team by 7 goals. Afternoon tea was served. (The Advertiser Thursday 30 August 1934 p 13

The following extract from Jobling and Barham’s ‘Development of Netball and the All-Australia Women’s Basketball Association’ provides background to the establishment of the club:

Netball, in its many guises such as basketball, 7-a-side, and women’s basketball, became a popular team sport for girls and women during the period of its introduction in Australia in the late 1890s. Although reliable historical data about its development in each state over the first two decades is scarce, one may speculate from the fact the AAWBBA was formed in 1927 that there was a steady growth in the number of players in school, suburban, church and commercial teams.

Until the formation of the AAWBBA there were state and regional variations in the rules of play. Much of the confusion, especially in relation to the number of players in a team, stemmed from publications from the Ling Association in England which promulgated the flexibility of teams numbering 5, 7 or 9.

The annual interstate carnivals which followed the formation of the AWBBA did much to standardise and promote the game throughout Australia. New Zealand netballers played the 9-a-side game with different rules and it was not until 1938, when a team from across the Tasman visited Melbourne primarily to participate in the inter-state tournament, that Australia first played an ‘international’ match.

By the end of the 1930s sport was becoming a part of life for the average Australian woman; sport had become for many women a pleasant social occasion that was a diversion from home. 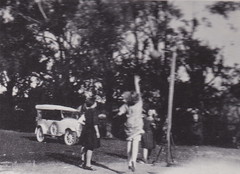 Do you remember Willunga Netball Club ? Then Join up and add your memory here.

This page was last modified on 10 April 2015, at 17:49.Text on this site is available under the Creative Commons Attributions/Share Alike licence; additional terms may also apply. See our Terms of Use.
About Now and Then | Places | People | Events | Organisations | Things | Contact us