In 1977, the Willunga Playgroup was established in the RSL hall and, by 1978, a Pre-School had also started with 14 children. Previously, Willunga children had attended the McLaren Vale Kindergarten. In the absence of a suitable venue in Willunga, the local playgroup of 30 families travelled to Blewitt Springs to use the hall.

After population projections predicted an increasing demand for pre-school education in Willunga, a house in Railway Terrace, previously Richards' Refreshment Room, was bought in 1979 by the Willunga Council, the South Australian Education Department and the Kindergarten Union.

Sessions began in February 1980 in the house, for 25 children aged between 3 ½ and 5. The Director, Lois Shearer, and teacher, Mrs Lynette Higgins, held 5 half day sessions. The ‘Children’s Centre’, as it was to be known, was officially opened by the South Australian Kindergarten Director, Dr F Ebbeck, on 25 November 1980. To celebrate the opening, the Pre-School Centre held an open week, where people could visit the Centre between 9:00 and 12 noon each day. The Kindergarten Union mounted a display to celebrate its 75th anniversary.

A grant had enabled renovations to the old building and the purchase of equipment. The Pre-School had the use of three rooms, with a small office, a semi-enclosed verandah and a garden. The building was shared with the local playgroup and the Willunga High School. Pre-school sessions were held on three mornings and two afternoons, with the playgroup sessions on the remaining two mornings. Students from Willunga High School shared the house, using it for electives and classes, including gardening and chicken raising.

Debbie George in was the teacher in 1980.

The Pre-School Centre moved to the Primary School in 2004. 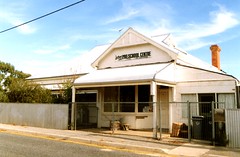 Do you remember Willunga Pre-School ? Then Join up and add your memory here.

This page was last modified on 30 May 2020, at 16:18.Text on this site is available under the Creative Commons Attributions/Share Alike licence; additional terms may also apply. See our Terms of Use.
About Now and Then | Places | People | Events | Organisations | Things | Contact us