Reverend Thomas Wood was educated in England, serving as a Church of England priest there and in Madras before arriving in Australia in 1884. 1 In 1887 he became incumbent at Robe and Kingston. In 1902, as the rector at Paskeville, he was 'an energetic and social member of the community. [He had] worked hard to improve the district and the church. …when Mr. Wood took charge of the parish the debt on the church was over £200, but owing to the pastor's energy this had been cleared off, the church thoroughly repaired, and debt extinguished.' 2

Seeking a change of climate that would improve his wife, Margaret’s, failing health, the family sought a transfer from the Paskeville parish to St Stephen's Church Willunga, where his enduring involvement in community and church affairs continued. Unfortunately, Margaret died about eight months after they moved to Willunga and is buried in St Stephen’s cemetery.3 Later, Rev Wood married Emily Mellor, who became the ‘Mrs T Wood’, who, with her husband, enjoyed local dances and exhibited successfully in a variety of classes at the Willunga Show. Rev Wood was a member of the Show Committee and president in 1910. 4 During his time as Rector at Willunga, the second church of St Stephen was consecrated, on 3 July 1902, by Bishop John Reginald Harmer, Bishop of Adelaide. 5 As a trusted member of the community, he became a member of the Board of Advice for the Willunga Public School, a local body that ensured that aspects of the Education Act were applied in schools. 6

During World War 1, Rev Wood frequently featured as a speaker at patriotic gatherings and was central to the farewells and returns of many of the local men who served in the war, acting as Cheer Up Society chairman. In this capacity, he unveiled the Cheer Up Society Collage of Willunga men who left for the war. 7 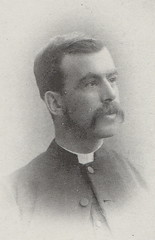 Do you remember Wood, Thomas (Rev) ? Then Join up and add your memory here.

This page was last modified on 12 September 2016, at 10:06.Text on this site is available under the Creative Commons Attributions/Share Alike licence; additional terms may also apply. See our Terms of Use.
About Now and Then | Places | People | Events | Organisations | Things | Contact us