The shed is built from large wooden slabs, placed vertically, with an iron roof, guttering and downpipes. It stands in Lot 183, an otherwise vacant lot on the corner of Kirk Street and St George’s Street in Willunga. One wall runs along the boundary of St George’s St. The shed is close to the boundary of Lot 184 and is on the bank of a small creek.

The slab shed is just across the road from Richard Polkinghorne's home on Lot 148, now 22 St Georges Street.

Barry Foreman recalled that “Richard Polkinghorne was a pig farmer/butcher and operated a butchering business from the home [Lot 148] for many years. We believe the slaughterhouse was on the eastern side of St Georges Street, somewhere near the creek, and this may explain why a very long culvert was built over the creek in this vicinity”. From this it is concluded that the slab shed was initially built in the 1850s or 1860s by Richard Polkinghorne for use as a slaughterhouse.

Much later, from the 1950s onwards, the shed was used as a dairy, calf shed, or chook shed by Alma Ruth (known as Ruth) Foreman who lived in the old Polkinghorne house opposite. Ruth was given the properties in 1949 by her mother Rose Foreman who, in 1937, had purchased 22 St Georges St. and subsequently transferred ownership to Ruth of all the properties on both sides of St Georges St (including Lots 148 and 183).

Ruth Foreman lived at Number 22 with her three children Brian, Dorothy, and Barry (David Barry) until she died in 1975. They “survived by milking a few cows and separating the milk, using the cream to make butter for sale and raising calves (and pigs at one stage) on the separated milk. Ruth also ran quite a few chooks and sold eggs and gathered and sold almonds growing on the property…”. Ruth was also a dressmaker. She died in 1975. 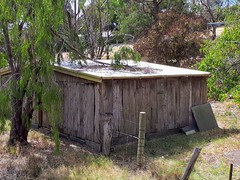 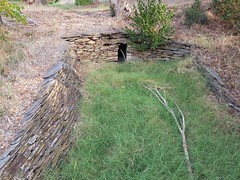 Do you remember Wooden slab shed, Lot 183, St Georges St ? Then Join up and add your memory here.

This page was last modified on 30 October 2020, at 09:27.Text on this site is available under the Creative Commons Attributions/Share Alike licence; additional terms may also apply. See our Terms of Use.
About Now and Then | Places | People | Events | Organisations | Things | Contact us